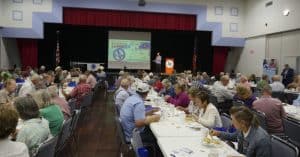 TOPICS FOR 2019 MILAM & BURLESON COUNTIES GROUNDWATER SUMMIT: STUDYING THE PREDICTED AFFECT OF PRODUCTION OF THE VISTA RIDGE PROJECT ON THE AQUIFERS OF OUR DISTRICT, AND LEGISLATIVE UPDATE FROM SENATOR KOLKHORST

The Milam and Burleson Counties Groundwater Summit is quickly approaching.  This event has been set for Wednesday, August 14, 2019 from 9 a.m. to 4 p.m. All are welcome to attend.   The Summit is free and open to the public with lunch provided. It will be held at the Caldwell Civic Center at 103 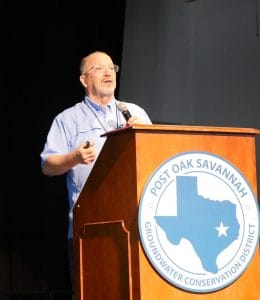 The date for the 2019 Milam and Burleson Counties Groundwater Summit has been set for August 14, 2019 from 9 a.m. to 4 p.m. All are encouraged to attend.   The Summit is free and open to the public with lunch provided. It will be held at the Caldwell Civic Center at 103 TX-21 in 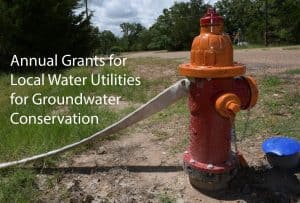 Gary Westbrook and Doug Box shared information  about the District’s Water Well Monitoring program at the Cameron Rotary Club 12.13.19 Here is a copy of the program Click Here 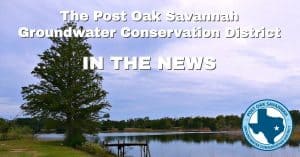 On January 8, 2019, Post Oak Savannah GCD welcomed Mr. Ed Savage as the new Board Member representing Rural Water interests from Burleson County. Mr. Savage is a resident of Burleson County and attended Texas A&M where in December 1989 he received his Bachelor of Science in Animal Science. Currently Ed is the Waste Water

Every year, the State of Texas, State Auditor chooses five Groundwater Conservation Districts and preforms a complete audit including their (1) achievement of selected groundwater management plan goals and (2) compliance with selected statutory requirements for each district’s fiscal year 2017.  Post Oak Savannah Groundwater Conservation District—fully achieved the majority or all, respectively, of their management plan

POSGCD Continues Sponsorship of Firefighting Equipment to Save

This past week the Post Oak Savannah GCD Board of Directors continued its support of local Fire Departments and efforts in water conservation in the District by providing a check for $6,975 to the Milam County Fire Chiefs Association for the purchase of nine new PRO/paks that use foam to suppress fires instead of water.

New Legacy Conservancy Program to Protect the Aquifers in Burleson and Milam Counties The Post Oak Savannah Groundwater Conservation District (POSGCD) announced today it is forming the Post Oak Savannah Aquifer Conservancy Program (PACP) to create a legacy of stewardship for landowners. This will enable landowners in the District to commit their groundwater resources into

The Texas Commission on Environmental Quality (TCEQ) today rejected a petition filed against the Post Oak Savannah Groundwater Conservation District (POSGCD) by a local resident who believed the District was not doing enough to protect the groundwater in Milam and Burleson counties. After consideration of all information, the TCEQ Commissioners voted unanimously to dismiss the

Bobby Bazan is another TAGD officer that is new to the Executive Committee. While Bobby wanted to be the President of the United States or