The Post Oak Savannah Groundwater Conservation District (POSGCD) announced today it is forming the Post Oak Savannah Aquifer Conservancy Program (PACP) to create a legacy of stewardship for landowners. This will enable landowners in the District to commit their groundwater resources into a long-term conservation program. POSGCD is empowered by the State of Texas to preserve, conserve, and protect groundwater resources in Burleson and Milam Counties. This ground-breaking conservation program will allow most land owners in the two counties to partner with the District in its mission to conserve the aquifers in this area.

Persons owning land above the Carrizo-Wilcox aquifers in the District will be able to commit the water under their property to the PACP for terms of five, ten, or twenty years while still maintaining full ownership and control of their private property. In addition to the important efforts of conserving water locally for future generations, participants will continue to play an important role in management of the groundwater resources in our District.

Another thing that makes this program so unique is that the district will pay landowners for their legacy effort in stewardship. Each landowner can still drill or maintain an exempt well for domestic and livestock uses. The exact amounts are yet to be determined but preliminary estimates are $5-$6 per acre, per year, with bonuses for the longer terms.

This is a strictly volunteer program, which is funded by fees collected by the district. Payments will be dispersed annually to participating landowners at the end of each year’s commitment.

“This is a very exciting program where individual landowners can work together with the District to protect the water in our aquifers,” said Burleson County Judge Mike Sutherland. Structured similar to other conservation programs, the PACP rewards landowners for conserving their groundwater.  POSGCD Board President Sidney Youngblood added, “This is further evidence of how our Board responds to the concerns of the citizens in our District.” Milam County Judge David Barkemeyer stated, “As empowered by the State of Texas, Post Oak has done an exemplary job of protecting the aquifers below each landowner’s property while preserving each landowner’s right to produce their water.”

POSGCD also has many additional programs of benefit to local citizens including providing grants to local water utilities, assisting fire departments with the cost of water conservation efforts, assisting landowners with the cost of plugging abandoned water wells, and providing grants for Rain Water Harvesting efforts in the District. The District also provides community services and educational presentations to citizens concerning groundwater and conservation, and in 2018 the Board of Directors adopted the POSGCD Groundwater Well Assistance Program (GWAP).  To learn more about Post Oak Savannah, visit our website at www.posgcd.orgor attend the Board Meeting on June 5 beginning at 5:30pm. 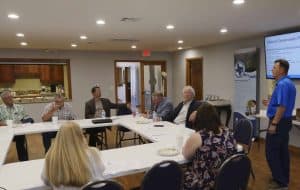