The Honorable Judge Sutherland welcomed attendees to the Summit. Judge Sutherland said that Post Oak Savannah Groundwater Conservation District (POSGCD) Board of Directors have challenging jobs and responsibilities. He said the Directors that represent Burleson County have done an excellent job. He talked about the selection process for Directors and welcomed Burleson County residents to come speak to him if they had questions. 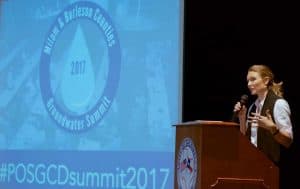 After Judge Sutherland’s welcome, Sarah Schlessinger, Master of Ceremonies and Executive Director of the Texas Alliance of Groundwater Districts (TAGD), welcomed the first presenter to the stage.

Robert Mace, a Deputy Executive Administrator of the Texas Water Development Board, was the first speaker. He gave an overview of the characteristics of aquifers and groundwater before delving into Groundwater Availability Models (GAMs). Mace told attendees that aquifers aren’t large ponds of water beneath the surface. Aquifers are dirt and rocks that water moves through.

Mace walked through figures and meanings of aquifers and groundwater. He then talked about groundwater flow and the differences between confined and unconfined aquifers. 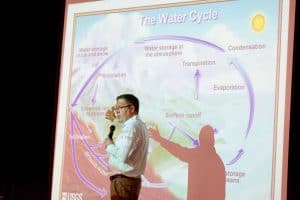 After his ‘Aquifer 101’ set up, Mace talked about GAMs. He said that the models are essentially taking what is known about aquifers and putting that knowledge into a computer to simulate them. The models are then used to help create Desired Future Conditions and District Management Plans.

Larry French, P.G., Director of the Groundwater Division of the Texas Water Development Board, talked about Desired Future Conditions (DFCs) after Mace’s presentation. A DFC is a measurable condition of an aquifer at a specified future time.

French started his presentation by going over two approaches to managing groundwater in the United States. In Texas, landowner own groundwater as a private property right. In other states, such as New Mexico and Colorado, groundwater is owned by the state.

DFCs are part of the joint planning process in Texas to help manage, regulate and protect aquifers and groundwater at the local level. French said groundwater could care less about county, state or any other political lines. That is why it is essential to implement management practices across areas that share resources.

The process to adopt DFCs include three groups: district representatives in groundwater management areas, individual districts and the Texas Water Development Board. At the District level, residents have the opportunity to look at and comment on the proposed DFCs, after which the DFC moves to adoption.

Creating an effective DFC is a balancing act between the highest practicable level of groundwater production and conservation, protection and prevention of waste. There are numerous factors and conditions that are required to be evaluated when creating DFCs, such as the State Water Plan, uses and conditions of an aquifer, hydrologic conditions, environmental impacts, socioeconomics, property rights and GAMs. 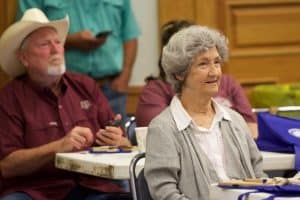 French wanted attendees to remember three main points from his presentation: DFCs are locally-driven with resident participation; DFCs are not set in stone and can be modified and adjustments as improvements in data happen; and Districts are responsible for managing aquifers and allowing DFCs to be reached.

The next presentation was a panel of speakers discussing the impacts of production in the Carrizo-Wilcox Aquifer. Mace was the moderator of this panel.

Kevin J. Spencer, P.G., President of R.W. Harden and Associates, Inc. has more than 25 years of experience developing fresh and brackish groundwater resources and was the first panelist to present. Spencer began by talking about how pressure in aquifers work and how that affects water level measurements. He said that the outcrop area and water table are better measuring tools to measure how pumping affects an aquifer.

Spencer went on to say that there is more groundwater in the Carrizo and Simsboro Aquifers than all of the lakes in Texas. He said that if the DFC were to be reached by 2060, that only 1.13% of the total water in the aquifers will be produced.

In summary, Spencer said that the Carrizo-Wilcox Aquifer system is a productive major aquifer, drought resistant, has large volumes of water in storage and is a long-term, reliable supply of water.

Second to speak was Chad Norris, an aquatic biologist representing the Water Resources Branch from Texas Parks and Wildlife Department. Norris said that TPWD has a responsibility to protect fish and wildlife resources in Texas and that they provide input to GCDs and GMAs as requested.

Norris said that surface water and groundwater interaction is extremely important to aquatic environments. Habitats such as streams, hillside bogs, ponds and rivers are dependent on groundwater.

When water is withdrawn from groundwater wells, it has to come from somewhere, Norris said. He knows there will be change with groundwater withdrawal, but cannot predict where that change will happen.

Moving forward, Norris said that it is important to monitor and learn more about groundwater and surface water interaction.

Toya Jones, a hydrogeologist from Intera, followed Norris. She started her presentation by stating GCDs are charged with regulating and protecting groundwater in the aquifers. She said that POSGCD’s management strategies consist of spacing requirements, maximum pumping limit, DFCs and Protective Drawdown Limits (PDLs) of shallow zones in the District.

Jones reminded attendees that POSGCD is the regulatory agency with authority and responsibility to regulate production and manage the aquifers in Milam and Burleson Counties.

Because the majority of registered wells in the District are 400 feet or less, the District is taking precautions to make sure that shallow wells are protected. Since 2000, drawdown in the shallow zone of the Simsboro has seen no net change.

Jones said that POSGCD, along with other GCDs and groundwater organizations, has been a leader in efforts to improve the GAM. This will help them to better understand aquifer characteristics, fault representations, surface water and groundwater interaction, and shallow zone predictions.

In conclusion, Jones said that POSGCD is in the process of expanding their monitoring network through increasing number of wells and frequency of measurement, coverage of aquifers, and continuing to support GAM updates.

The first workshop is scheduled for October 10, 2017. Those interested in participating should call the POSGCD office at 512-455-9900 to sign up. There is also an Earth-kind Water Conservation Workshop scheduled for November 6, 2017.

After lunch, the Honorable Judge Barkemeyer, Milam County Judge, welcomed everyone back. After an anecdote about cleaning out water bins and water towers, Barkemeyer briefly described how the Board of Directors for POSGCD are selected and appointed and how Directors create and set policy to be carried out by POSGCD staff. He then handed over the stage to the next panel.

The panel reviewed similarities and differences among the neighboring Districts that make up GMA 12. Each general manager had an opportunity to explain why their management practices and rules varied from other GCDs in the GMA and how those differences impacted the GMA as a whole. Differences such as type of permits, exemptions, enforcement and spacing requirements were discussed at length. 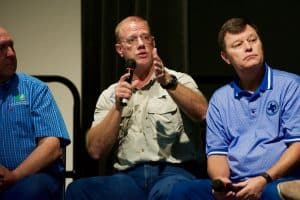 GCDs also share data among GMA 12 to improve the understanding of the aquifer as a whole.

As an aquifer’s characteristics change over different areas, management and policies c
hange as well. Additionally, each District has different populations and uses of water that need to be considered.

Westbrook and Steven Wise, Vice-President of the POSGCD Board of Directors, then followed with a presentation about the POSGCD Groundwater Well Assistance Program (GWAP), which is in the last stages of development.

The purposes of the GWAP are to restore a water supply to well owners in the District that have experienced significant adverse impacts caused by aquifer-wide pumping in GMA 12 and to improve the POSGCD monitoring program. Westbrook and Wise said that the GWAP will be funded by fees collected by the District and will be a separate line item in the POSGCD budget.

The GWAP is set to be posted for a 90-day comment period by October 3, 2017 with hopes of adoption by January 5, 2018. There will be ongoing evaluations to continue to improve the GWAP.

Bazan talked about what the monitoring network is and how it helps the District make management and rule decisions. There are currently 112 wells in the network, with 16 of them being measured continuously. The rest are measured annually.

Becoming involved allows each landowner to participate in the improvement of the data which influence the decisions made by Directors.

Bazan and Sifuentes said the District is focusing on the shallow Carrizo-Wilcox zone and will have 50 additional wells by the end of this summer. They are also increasing the frequency of measurements and improving data sharing by creating a new web-based interface that will be coming to the POSGCD website.

If you are interested in learning more about the Monitoring Network, call the POSGCD office at 512-455-9900. 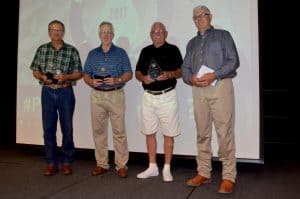 POSGCD Board of Director President, Sidney Youngblood, awarded three of the Directors during the Summit for outstanding service to the District since 2001. Directors were Nathan Ausley, Kerry Starnes and Bob Ware.

During breaks, Megan Homeyer, Education Coordinator of Post Oak Savannah GCD, gave updates about the POSGCD website and social media. She invited and encouraged attendees to get involved with the District.