The District is governed by a 10-member board of directors — five from Milam County and five from Burleson County. Directors are appointed by the County Commissioner’s Courts to represent agriculture, municipalities, industry and rural water. The fifth director from each county is an at large representative. The 10 Directors make up the eight committees that bring recommendations to the Board. 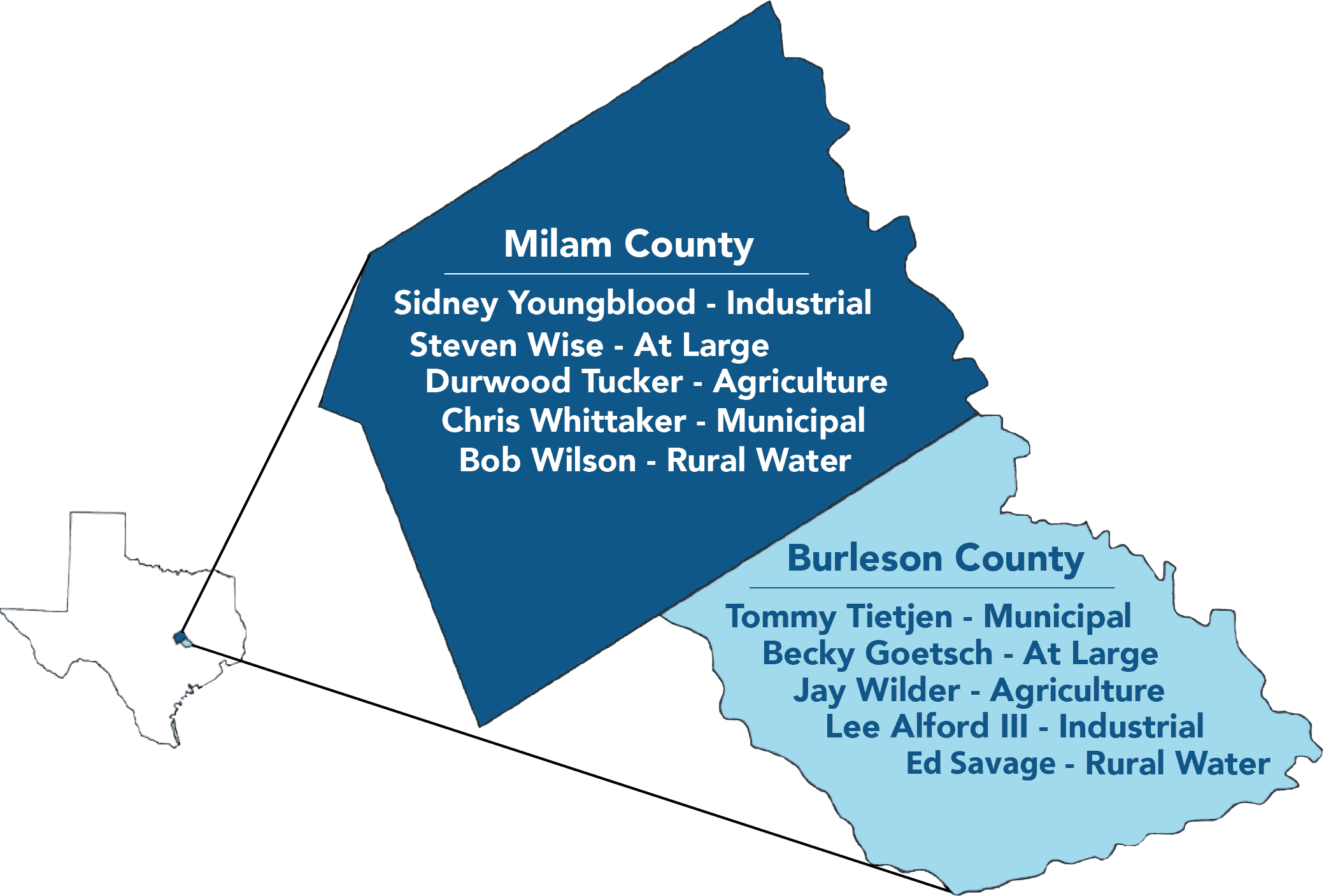 Sidney Youngblood has lived in the Marlow community Milam County for the majority of his life.  Living on a ranch located just east of Cameron that was originally purchased in 1962, Sidney greatly enjoys living the ranching lifestyle managing a cow/calf and replacement heifer operation that is particularly true to form of his father’s passion for farming, ranching and property stewardship. Sidney was appointed to serve on the Board in 2013 and was elected Board President in 2016.

Sidney has worked in K-12 school furniture sales for 30 plus years.  He very deliberately marks his professional career highlight as to have served as Vice-President of Sales with Royal Seating Corporation for almost 20 years valuing the mentorship received from recognized industry leaders.  Sidney’s daughter Julianne Youngblood is currently a junior at C.H. Yoe High School where she excels in the classroom and enjoys running track.  Julianne looks forward to pursuing and receiving a degree from Texas A&M University College of Veterinary Medicine.

Steven Wise moved to Milam County in 1983, graduated from Yoe High and Texas A&M.  He is an Executive Vice President for Citizens National Bank and resides in the Liberty Community with his family on land that has been owned by his family for 80 years, his father still has a cattle operation on the land.Steven was appointed to the Board in 2013 and was elected Board Vice-President in 2016. Steven says, he finds the science of groundwater management and hydrology very interesting and being a landowner/well owner in the shallower part of the Simbsboro aquifer I have a vested interest in the management of groundwater. I am dedicated to the equitable treatment of all property owners according to the Texas law.

Tommy Tietjen lives in Burleson county on a ranch land that has been in his family since the early 50s where he runs a cow calve and stocker operation. He serves on the Burleson County FSA Board, is a Go Texan Volunteer and is a sponsor member for the Rocky Mountain Elk Foundation. He is the past Brazos Valley Chapter Chair of the Elk Foundation and a member of the SW Cattle Raisers Association. Tommy has served on the Post Oak Board since 2012. Tommy believes our natural resources are very important so we can pass on our land to future generations in as good a condition as he received from my parents.

Lee Alford serves as a Director on the Board of the International Brangus Breeders Association and is a Director on the Board of the Texas Brangus Breeders Association. He is also a Ruling Elder on the Session of the First Presbyterian Church of Caldwell. Mr. Alford attended the University of Texas in Austin on a football scholarship. Mr. Alford is a 5th generation rancher in Burleson County and ranches land that has been in his family since 1872. He raises both registered and commercial Brangus, Angus and Brahman cattle. He is widowed with two sons and three grandchildren. Lee believes in protecting every landowner’s ownership rights to the groundwater beneath his or her land.

Becky Goetsch has lived in Burleson County since 1983, where she met and married her husband, Gabbo. She is an active member of Elizabeth Lutheran Church in Caldwell and was the coordinator of the Elizabeth Lutheran Community Pantry for five years, where she still continues to volunteer as financial secretary. After careers with Chevron Corporation and as a certified medical transcriptionist, she currently stays busy raising cattle with her husband on land that they proudly own in western and northwestern Burleson County. Becky believes strongly in landowner rights and preservation, conservation, and protection of the aquifers underlying Burleson and Milam counties.

Dana L. McClaren attended the University of North Texas graduating with a B.B.A. in Marketing in 1981. She then attended Texas Tech University School of Law where she became a member of the Order of Barristers as she received a J.D. in 1984. She became an Associate Attorney with the Dallas law firm of Cowles and Thompson and later became a partner with the firm, practicing primarily in personal injury defense litigation. She was a founding partner of the Cowles and Thompson satellite office in Temple, TX, where she was the managing partner of the office. Dana left the practice of law to raise two daughters, Bryn and Ryle. She and her family relocated from Houston to Cameron, Tx in 2008. She has been responsible for the design, construction and maintenance of the buildings at 44 Farms since approximately 1999. Dana has been married to her husband Bob, the owner of 44 Farms, since 1985. She has participated in many volunteer activities including the Junior League in both Temple and Houston, parent leadership organizations at several schools, the Board of Directors at Marlow Water Service Corporation and is presently serving as the leader of a ladies bible study at Marlow Baptist Church.

Ed Savage is a resident of Burleson County and attended Texas A&M where in December 1989 he received his Bachelor of Science in Animal Science. Currently Ed is the Waste Water Field Operations Manager for the City of College Station. He has been employed in this position since 2001. Prior to this job, he was an Environmental Services Technician and Water/Wastewater systems operator for College Station. He also owns and operates Savage Water Services, LLC, to manage small rural water suppliers in Burleson and Washington Counties.

Ward Roddam has lived in Milam County for the majority of his life.  Growing up in Minerva, Texas, Ward and his wife of 32 years, Kathryne now live in Rockdale, Texas, where they raised their three daughters, Katie, Kassie and Kourtney. Ward graduated from Rockdale High School in 1982.  After attending Sam Houston State University, Ward graduated with an Associates Degree in Behavioral Science from Bastyr University. Ward worked 20 years for Alcoa Rockdale Operations in various roles as an hourly employee and in management positions.  Following the close of Alcoa Rockdale Operations, Ward has spent the last 12 years as a Health and Safety Manager in both the Oil and Gas Industry and the Industrial Services Industry.Ward has been an active member of the Rockdale Volunteer Fire Department since June of 1989 and has served as Fire Chief for the City of Rockdale for the past 12 years.  Ward considers himself a dedicated public servant having also served on the Rockdale Volunteer EMS, as a director on the Rockdale Chamber of Commerce, and Chairperson of the RISD New Schools Development Committee.

Jay Wilder graduated from Texas A&M University with a degree in Animal Science. He is a graduate of Texas Agriculture Lifetime Leadership Program, is the president of the Texas Grain Sorghum Association and was President of the Tri-County committee with Texas Agri Life. He is a 4th-generation farmer and he and his wife, Molly, reside on his farm in the Brazos River Bottom near Snook where he has a cow/calf operation, and raises purebred Limousine

About Us
Copyright 2020 POSGCD.ORG.- All Rights Reserved | Sitemap